Things You Can Do Around Marina Bay

GARDENS BY THE BAY
You will recognise the distinctive Supertrees – 25 to 50-metre-tall vertical gardens that collect rainwater, generate solar power and act as venting ducts for the park’s conservatories. Take on the OCBC Skyway, a 128-metre-long walkway suspended between two Supertrees, for a bird’s eye view of the park. As dusk falls, the Garden Rhapsody comes on. This dazzling light and sound show takes place nightly amid the Supertrees. Then dine at romantic Pollen in the Flower Dome, restaurants at the Supertree Food Hall or Satay by the Bay for hearty local food.

It is hard to miss the sprawling 101-hectare lot right by the water in Marina Bay. Two huge futuristic structures rise out of the greenery at Gardens by the Bay, which was designed with environmental sustainability in mind. These are the Flower Dome and the Cloud Forest cooled conservatories, which was listed in the 2015 Guinness World Records as the world’s largest glass greenhouse. 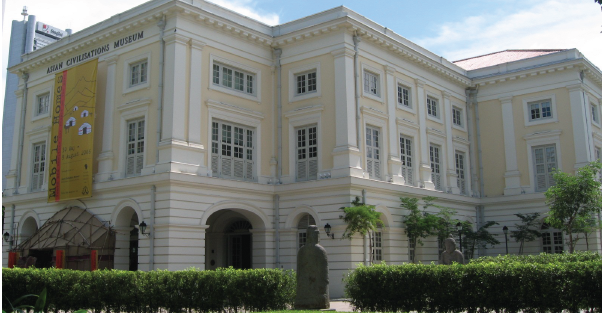 With its mix of races and cultures, Singapore has rightfully earned a reputation for being the cultural melting pot of Asia. To highlight this diverse heritage, the Asian Civilisations Museum (ACM) takes you on a grand exploration of the people from around the region that have settled on our shores over the past two centuries. The ACM is the only museum in the region devoted to exploring the artistic heritage of Asia, especially the ancestral cultures of Singaporeans.

The ACM is far more than just a spectacular history lesson. Expect programmes like the annual River Nights, where you can connect closely with culture and the arts. After marvelling at all that history, you can also take time to reflect with a bite at Privé Café @ ACM or Cantonese restaurant, Empress. Then, exit through the gift shop and pick up some unique mementos of your trip to the ACM. 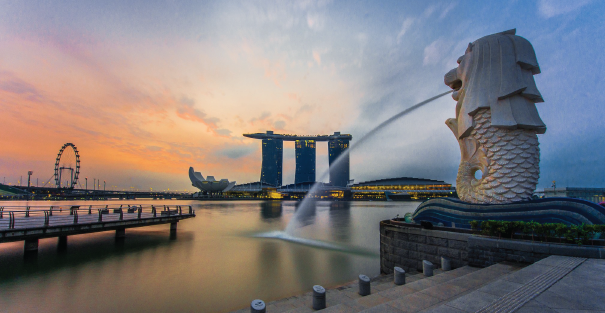 You have probably seen images of Singapore’s national icon, the mythical Merlion with the head of a lion and the body of a fish. The body symbolises Singapore's humble beginnings as a fishing village when it was called Temasek, meaning 'sea town' in Old Javanese. Its head represents Singapore’s original name, Singapura, or ‘lion city’ in Malay. Today, you can glimpse this legend at Merlion Park. This is a ‘must-see’ for tourists visiting Singapore, similar to other significant landmarks around the world. 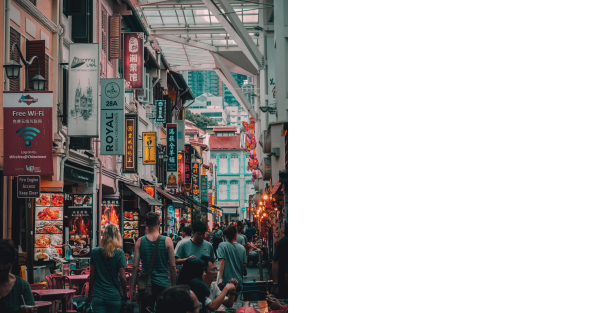 Gain insights into Singapore’s rich, multi-ethnic culture by visiting some of the country’s most fascinating places of worship, located in the heart of Chinatown. This age-old precinct is home to myriad different cultures and is the only Chinatown in the world to boast a Buddhist temple, a mosque and a Hindu temple along a single street.

Whether you are a foodie exploring the traditional flavours of a country or a gourmand who loves fusion and experimentation, Chinatown’s diverse food offerings are certain to sate your appetite. To experience Singapore’s multi-ethnic culinary traditions, make Chinatown Food Street your first stop. This open-air stretch of eateries provides visiting foodies a smorgasbord of well-loved Singaporean hawker food.

Foodies looking for behind-the-scenes insight into the preparation of Japanese dishes should visit Meta at Keong Saik Road. French fare meets Asian influences at this Michelin-starred restaurant, with dishes including grilled langoustine seasoned with seaweed, and Japanese seabass served with razor clams and chorizo. Visitors should reserve a seat at the counter if they would like to watch the chefs at work. 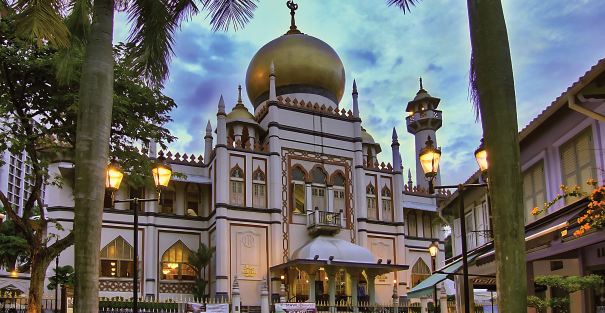 Some say Kampong Glam really is glam (a local term meaning glamorous). The area has an eclectic blend of history, culture and a super-trendy lifestyle scene. Kampong Glam has its origins as a thriving port town and is Singapore's oldest urban quarter. In Malay, the word kampong means "compound", while glam is often attributed to the gelam (long-leaved paperbark tree), which was found and used locally for boat-making, medicine and even as a seasoning for food.

Today, the grounds of the Istana (palace) is home to the Malay Heritage Centre, where you will get many insights into Malay history and culture. You will love the culinary delights here, from local delicacies such as Nasi Padang (steamed rice served with various dishes) and Malay kueh (bite-sized desserts) to Middle Eastern, Japanese, Swedish and even Mexican fare. 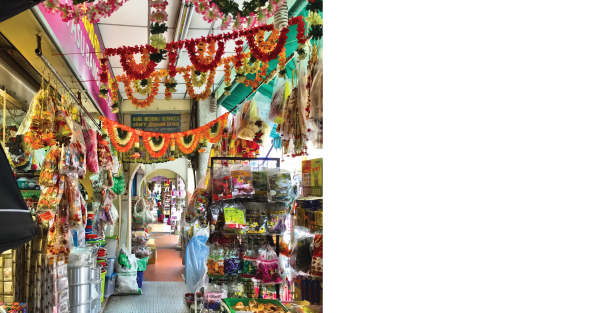 You may not know that Little India once had a racecourse, cattle herders and brick kilns. In the 1840s, Europeans lived here mainly for the racecourse, where they met and mingled. When cattle trading took root, it became a mostly Indian trade as traders hired Indian migrant workers. Certain goods and services took off, and mosques and Hindu temples were built.

However, while these places and people are gone, time stands still in pockets of this historic district. Olden-day trades sit next to newer businesses: flower-garland vendors, modern eateries, boutique hotels, as well as arts groups. Little India today is one of Singapore’s most vibrant districts. As you walk down Serangoon Road and neighbouring streets, explore their mix of Hindu and Chinese temples, mosques and churches.

Fill your tummy with South Indian vegetarian food, North Indian tandoori dishes and local fare like roti prata (round pancakes) and teh tarik (pulled tea in Malay). Try to spot the brewers ‘pull’ the hot milk tea—its amazing showmanship. Do not forget to shop. The 24-hour shopping mall Mustafa Centre offers everything from electronics to groceries, or take your pick from open-air Tekka Centre, goldsmith shops and sari stores. With its close proximity to the city and a bohemian vibe, many artists also call Little India home. 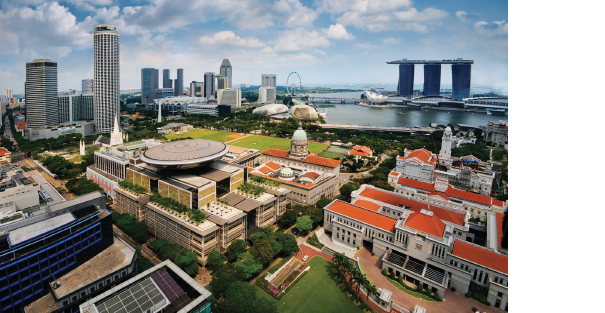 Your Singapore trip is not complete without a visit to the Civic District, where modern Singapore began. Started as a master plan in 1822 by founder of Singapore Sir Stamford Raffles, the Civic District was urban planning at its best, with sections along the Singapore River marked for use and new buildings erected for the needs of a thriving trade post.

Here, some of the country’s most historic buildings have been restored and given a new lease of life. Looking for Singapore’s old Parliament House? That would be The Arts House, built in 1827 for the Court and other Government Offices. In 2015, the City Hall and former Supreme Court were reborn as the National Gallery Singapore, which displays the world's largest collection of Southeast Asian art, including works from Singaporean artists. 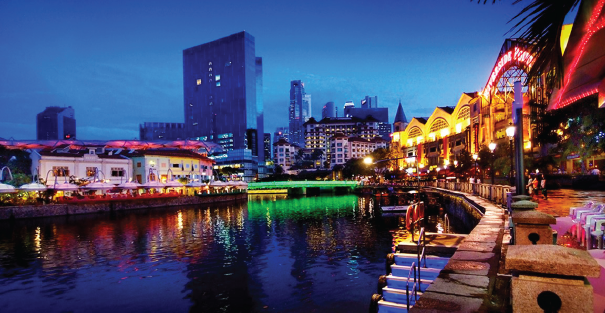 Wondering where to drink in Singapore? Your best bet is to check out Clarke Quay and Boat Quay, two of the city’s liveliest nightlife spots.

From iconic dance clubs to live music venues and rooftop bars, this ultimate guide to drinking and partying in both Clarke Quay and Boat Quay is a must-have for anyone looking to have a boozy good time in the city.